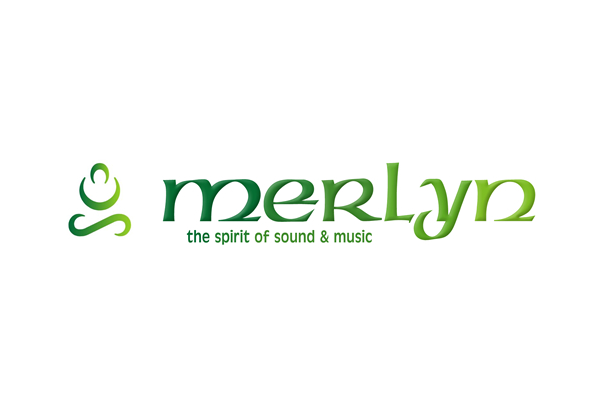 What is a Shrutibox and how is it played?
The shrutibox (also called sruti box, surpeti or swar pethi) is a perfect accompaniment for modal music, improvisation, voice work, overtone singing, music therapy and all kinds of Indian music. It gives a full, supporting drone sound and is sturdy, mobile and extremely easy to handle. In order to get started you first need to unlock the wooden latches of the bellows on both sides. Next you open the levers for the notes you like to sound. Finally you gently move the open bellows on one side - and there unfolds your drone! Your second hand is not required for playing - it remains free all the time.

Who can use a Shrutibox?
The shrutibox needs neither tuning nor an elaborate playing technique. Thus it is equally suitable for complete musical beginners and for professional musicians, teachers, therapists and performers. It produces a pleasant natural acoustical carpet of sound for any kind of work and allows to keep full concentration on singing, talking, watching or moving while being played.

Construction
The shrutibox, also called surpeti, produces a powerful, carrying drone sound and is extremely easy to play. It is ideally suited for accompanying any kind of Indian music, voice work, modal improvisation or overtone singing, or Indian wind instruments, especially the bansuri (bamboo flute). Sound and tone production are similar to that of a harmonium or an accordion: metal reeds inside the instruments are caused to vibrate by compressed air passing by them. The air movement is controlled by two bellows on both sides of the instrument. One side carries 13 levers. Opening them allows the air to stream out from the inside and causes the reed underneath the lever to produce a note. The shrutibox covers a full octave of 13 chromatic half notes. That way you can freely choose a tonic that best suits your specific requirements. For a particularly rich and full sound it is advisable to add a fifth or a lower fourth to the tonic. Any other combination is possible as well, of course.

Its advantages over the harmonium:

How to play
The shrutibox can be played with one hand either sitting or standing or even walking. First you have to open the side levers that lock the whole instrument. Then you open the levers for the desired notes - this side should be facing you. Now put your hand on top of the instrument and press the side without the levers towards yourself. The volume can be adjusted by varying the tempo and pressure applied to the bellows. When you loosen the pressure of your fingers the bellows will automatically unfold and you can press again to get a continuous sound. If you slip your hand through the handle on top of the instrument you can carry and play it at the same time with just one hand. Alternatively you can also put a strap through the handle and hang it around your neck.

Tips for playing
It is best to keep the shrutibox standing on even ground or any stable support. Alternatively it can be carried on its handle to allow free movement while playing. Volume and continuity of sound depend upon the speed and pressure of the movement of the bellows. You will get a feel for that in no time. A particularly round and beautiful drone is created by adding the fifth or the fourth above the chosen fundamental (also called "tonic"). Other combinations of notes are possible as well according to individual preferences - from straight major chords to dissonant clusters. But watch out: More sounding notes mean more air consumption - harder pumping is required in order to maintain a steady sound!

History
The shrutibox has been developed from the European harmonium, which had been brought to India by missionaries in the 19th century. It is also called surpeti and is traditionally used mainly for vocal accompaniment of folk or religious music. Its lack of a keyboard makes it a pure drone instrument. Drones are continuously sounding single or multiple notes, whose uninterrupted presence creates an open space of sound. This space can be filled by melodies or other musical structures. The idea of drone is an essential part of Indian music. However drones are known in Western music, too, especially in its more ancient forms. Some Western instruments like the bagpipe or the hurdy-gurdy even have drones built in. 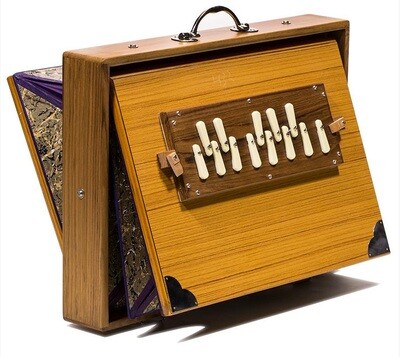 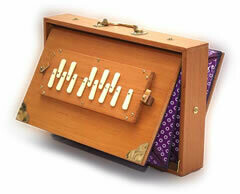 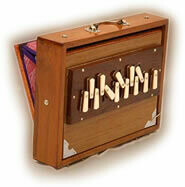 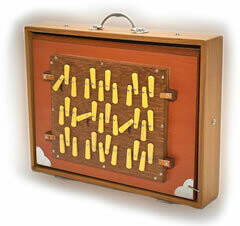 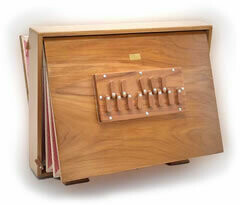 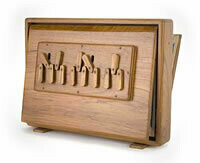